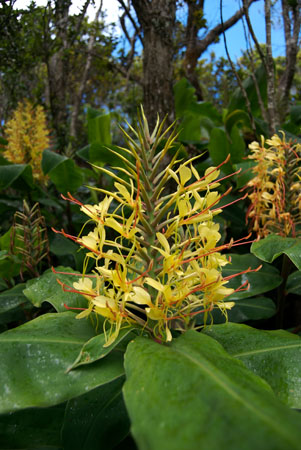 Kahili Ginger (Hedychium gardnerianum) is a fragrant flowering plant native to eastern India. It is also ranked in the Global Invasive Species Database as one of the 100 most destructive invasive species on Earth. Its manner of propagation depends in large part on Homo sapiens‘ marked affinity for its deeply alluring scent and vibrant colors — its introduction to the Hawaiian Islands is blamed on the ornamental horticulture industry. Upon entering the glade in which these plants had taken up shop, we became so intoxicated by their sensuous odor that we mistook this most vicious of invaders as being endemic to the island of Kaua’i.

Kahili Ginger is a mortal threat to many endemic species and can choke entire forests — blocking out the life-giving rays out of the sun, slowly suffocating whatever seedlings that have the misfortune of being rooted beneath its slick, wide leaves. It is a particular menace to the native rain forests of the Hawaiian Islands.  But still so easy on the eyes and nose. 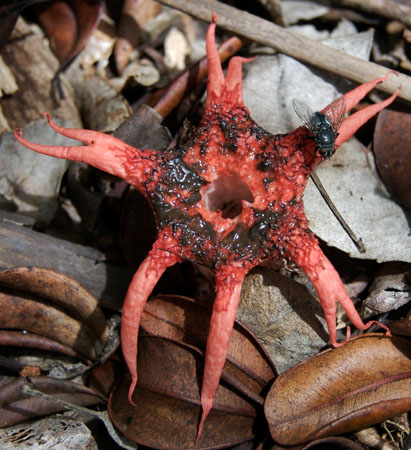 This salmon-colored starburst of Lovecraftian horror is Aseroë rubra, a name that translates from Greek to English as something like “red fungus with disgusting juice.” The rotted-meat-scented juice of this Australia-native fungus — also known as a sea anemone stinkhorn — is brown in the specimen pictured above; this seems apt given that it is smeared around the fleshy, gaping orifice that serves as entry point to its hollow stalk.

The juice — let’s go ahead and clarify that it’s actually a spore-laden gel called gleba — is quite viscous, which prevents it from washing away in the frequent rainstorms that break over the Alaka’i Swamp. Its odor — alternately described in terms of shit and dead flesh — attracts flies and other carrion-feeders, who then spread the spores in their own foul little poops: Witness the gleba-gobbling fly on the 2 o’clock tentacle.

A black and white photo of just such a specimen as the one pictured — discovered in a tattered old trail guide —  is what convinced the Into The Green mission to explore the Alaka’i Swamp, a tropical moist forest located just under 4,000 feet in altitude in northwest Kaua’i. The mountain range in the horizon from our earlier set of Kaua’i Photos — click here to read about our first night on the island — separated our Wainiha Valley cottage from these fetid highlands. Part of Kaua’i’s imperviousness when it comes to development is a result of  the fact that no road divides the center of the island, nor circumvents its shoreline. Thus a location just some 18 miles from the Wainiha Valley can only be reached via automobile by traversing 75 miles — nearly the entire circumference of the island. The other alternative being an epic days-long trek through the soggy wilderness.

And finally we have this bushy lichen of what we believe to be the Cladina species. It is frothing up from a decaying tree stump, sparkling with the rain that falls approximately every 20-40 minutes in the Alaka’i Swamp.

Previously on Into The Green:

Words and images by Muncie, IN-based artist and writer
Daniel Chamberlin. Into The Green header lettering by Arik Roper.

Chamberlin is also the host of Inter-Dimensional Music, a weekly broadcast of “heavy mellow, kosmische slop, and void contemplation tactics,” heard since 2010 on Marfa Public Radio in Far West Texas and 99.1FM WQRT Indianapolis. His creative practice combines visual art, installation, performance, and audio with mindfulness teaching based on the radical implications of yoga and Zen. His visual art is concerned with uncovering the transcendent and psychedelic aspects of otherwise mundane objects and experiences.

He was previously a resident student at the Indianapolis Zen Center; communications director for Texas arts nonprofit Ballroom Marfa; medic (NREMT-B) with Marfa Emergency Medical Services; contributing editor at Arthur Magazine; and editor-in-chief of URB Magazine. He is a 2017 graduate of Exalt Yoga’s 80-hour Yin yoga teacher training program, and holds a BA in psychology and film studies from Indiana University.