The June 9 2008 Expedition into Debs Park got off to a rousing start, as my companion’s dog Baroo did purloin a Hot Dog from some fishermen. They were using the Hot Dog for bait, and it was working. They hauled a tiny ovular fish from the depths of Debs Pond. The fish’s future was uncertain as they were going to give it to some other guys fishing on the far side of the pond.

Afterward we looped around the hillsides, and began another ascent to the pond. It was here that we did see many snails in their coiled cylinder shells, expired and dried, ascent up crispy stalks of dead grass frozen in the sunshine. 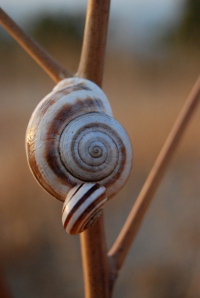 It is of such equiangular spirals as we see in their shells that Roman poet Pliny saw “magna ludentis naturae varietas” (the vast variety of nature at play), a quote that I came across while browsing D’arcy Wentworth Thompson’s 1942 biology classic On Growth and Form. Thompson:

In the great majority of cases, when we consider an organism in part or whole, when we look (for instance) at our own hand or foot, or contemplate an insect or a worm, we have no reason (or very little) to consider one part of the existing structure as older than another; through and through, the newer particles have been merged and commingled among the old; the outline, such as it is, is due to forces which for the most part arte still at work to shape it, and which in shaping it have shaped it as a whole. But the horn, or the snail-shell, is curiously different; for in these the presently existing structure is, so to speak, partly old and partly new. It has been conformed by successive and continuous increments; and each successive stage of growth, starting from the origin, remains as an integral and unchanging portion of the growing structure.

Thompson also points out similarities in “the elephant’s tusk, the beaver’s tooth, the cat’s claws or the canary-bird’s.” Then he gets to the meat of it:

Somehow or other, the equiangular spiral the time-element always enters in; and to this important fact, full of curious biological as well as mathematical significance, we shall afterwards return.

The topic of snails certainly merits further investigation; return with Thompson we most certainly shall. 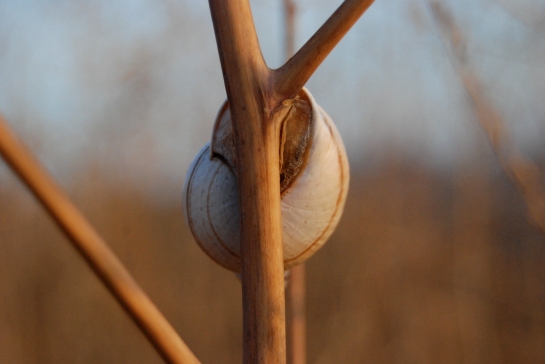